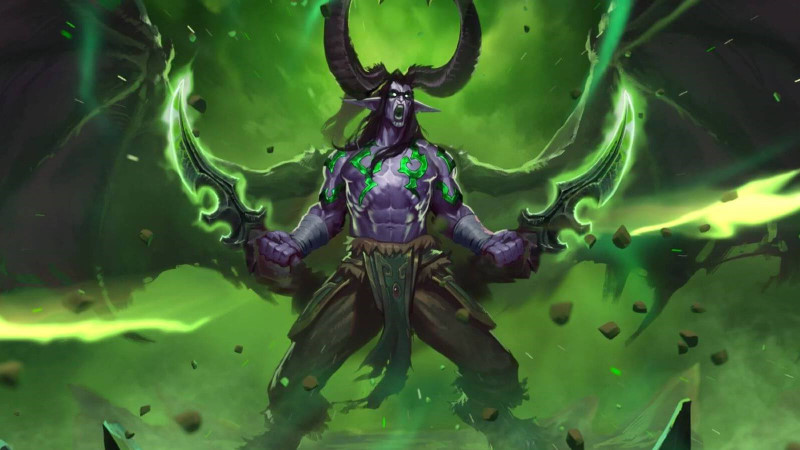 Today, Blizzard and the Hearthstone team announced a major new update, containing a new hero class, a new expansion, a new ranking system, and many new cards. Players are also eligible for a free legendary, known as Kael’thas Sunstrider, which is a Legendary neutral minion, and is available right now.

The set, "Ashes of Outland", which is releasing on 7 April, contains all new cards and a new Hero, Illidan Stormrage, which is a part of the new Demon Hunter class. Empowered by demonic energy, the new hero's hero power Demon Claws, which grants your hero +1 attack this turn. This set can be preordered with The Mega Bundle, which contains 90 Ashes of Outlands packs, A new Shaman Hero, a new card back and a random legendary card.

Along with the release of this upcoming set, many cards are being "rotated out" of the Standard format, meaning they can no longer be played in Standard, but can still be played in the Wild fromat. To compensate for the increase power level in Wild, many cards that were nerfed and are being rotated are being un-nerfed so they can be more balanced within Wild. Certain neutral cards and Priest class cards that were in the non-rotating "Classic" or "Basic" sets are also being sent to the Hall of Fame, where they will no longer be availible in standard, but will be availible in Wild. Those who own the cards being rotated are eligible for a dust refund. The priest cards have been Hall of Famed due to bring Priest more in line with its class identity and help them explore exciting new archetypes.

The ranked system is being overhauled, with everyone being reset to the lowest rank each season and gaining a certain star multiplier based on their previous rank, which allows them to rank up faster and return back to the postion they were in. The rewards for the ranks have also been changed.

New additions have also come to Hearthstone Battlegrounds, one of the game's additional game modes. One new hero (Fungalmancer Flurgl) and one returning modified hero (Sir Finley Mrrglton) have been added, and many heroes and cards have been reworked or rebalanced. These changes are effective immediately. A full list of balance changes can be found here.

With the release of the new set, a new product, The Tavern Pass, has been introduced. Available for US$19.99 or 2500 Gold, the Tavern Pass includes four Arena Tickets and advanced stats, visual emotes, a third and fourth hero to choose from at the start of a game, and possible early access to new Battlegrounds Heroes. This has replaced the previous method of opening packs to unlock similar perks.

A new solo adventure is coming soon, but more news about this is still to be announced.