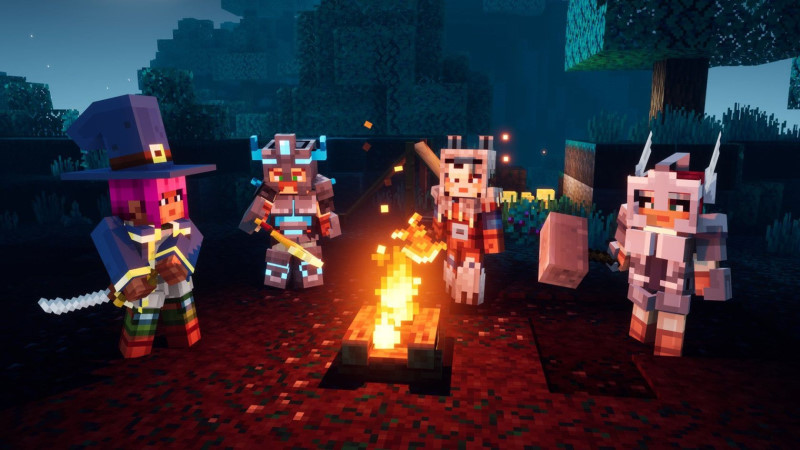 Mojang Studios is branching out further with the release of Minecraft Dungeons today at 8 am UTC.

Dungeons is a spin-off of the base Minecraft game, an isometric dungeon crawler though randomly-generated terrain. It is Mojang's second time expanding on the base game after their mobile AR game Minecraft Earth, which entered early access last year.

Contrary to the name "Minecraft", Dungeons features no mining or crafting – instead, you will find useful upgrades to your items throughout the dungeons' loot chests. Notably, the game features no character classes, and abilities are based on what equipment you are wearing.

The game can be played alone or with up to four players in co-op mode, with each player having to complete challenges and quests to progress through the game's levels. When playing co-op, the difficulty level, enemy count, and loot will adapt to the number of players in the session.

Dungeons contains many exclusive features not seen in the base game, including the elusive mysterious Key Golem. The main antagonist in the game is called the Arch-Illager, and is central to advancing the plot.

The game was first announced at Mojang's live Minecon Earth show in 2018, and entered closed beta for select players on 25 March, originally slated for a release date in April. The closed beta allowed players to explore demo levels of the game.

At the end of March, its release was postponed until 26 May due to COVID-19. The closed beta ended on 24 April.

Developed by Mojang (and Double Eleven for consoles) in Unreal Engine 4 and published by Mojang's parent Xbox Game Studios, Minecraft Dungeons is now available on Windows, Xbox One, PlayStation 4, and Nintendo Switch, and as part of the Xbox Game Pass. The base edition of the game costs US$20 while the Hero Edition costs US$30 and includes cosmetics and two DLC packs, as stated in the game's FAQ.

Note that there are two Windows versions of the game: the one titled "Windows 7 and Above" features its own launcher, similar to Minecraft: Java Edition, while the Windows 10–only version is delivered through the Microsoft Store instead of a standalone launcher.