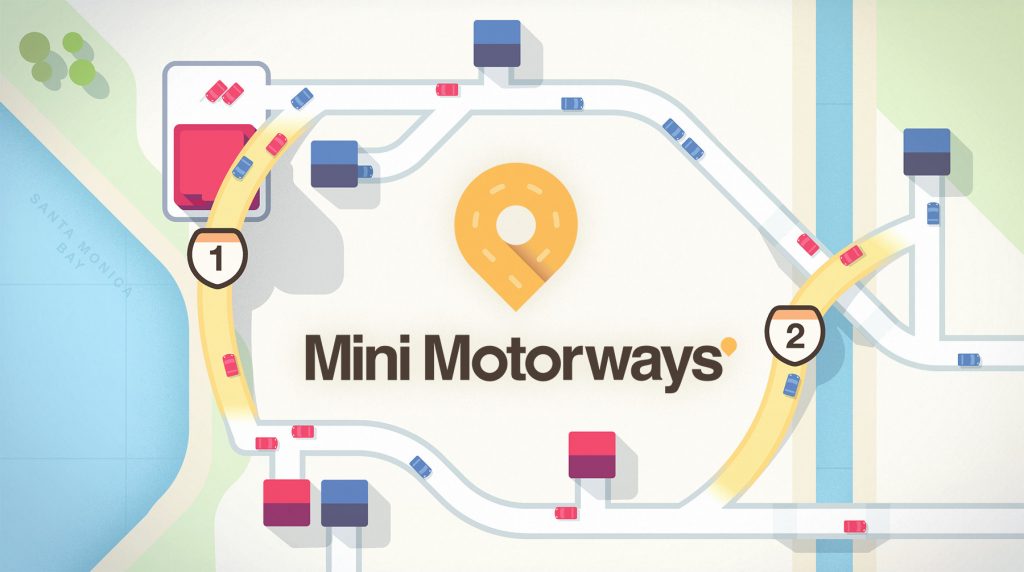 A sequel to minimalist train simulator Mini Metro is about to arrive: Mini Motorways, a traffic simulator that continues and builds on what makes the original great.

Mini Motorways is Dinosaur Polo Club's second game, and at first glance looks very similar to Mini Metro. There are a bunch of buildings on the map that you have to connect with roads, that's it. But strategy lurks behind this simple premise.

The game has only one objective – build an efficient road network that connects buildings to each other in a way that doesn't create a build-up of traffic. If there's too much traffic people will start to complain (denoted by a ticking timer above a waiting building), and if you do not fix the issue in time the level will end.

Unlike its predecessor, where all points on the map are created equal, Mini Motorways has two main types of building: small houses and larger stores. Each house has some cars which need to be able to travel to the stores and back.

There is a twist, however. Each house and store has its own colour: people in blue houses only travel to blue stores, and likewise for the other colours. Some stores are duplexes, containing two stores of different colours.

Each house has two cars. Stores produce products, denoted by a pin above the store, and cars from the houses come to collect their resource. Once the car has traveled back home after picking up the product the match's score increases by one.

Each week you are given new resources to help with managing the network. Road tiles are a given but you can also get roundabouts, traffic lights, and the namesake of the game, motorways. Motorways allow you to connect two points on the map where cars can quickly travel between, and the first two are self-explanatory.

There are eleven maps to choose from, such as Los Angeles, Tokyo, and Dubai. Later maps are unlocked once an acceptable score in a previous level has been met. This score measures how many cars have made it to their destination and is saved per-level.

When you first play Mini Motorways you will be thrown in the deep end – the game tells you the basics and leaves you to it.

Any strategies you may carry over from Mini Metro aren't very effective. Motorways requires you to join up points on the map effectively, while Metro leads to circular tracks that cover as many stations as possible.

The first game I played was chaotic – I tried creating a central network but this was quickly overwhelmed as you only have one road size that cannot be upgraded like in other simulation games.

Each week gives new rewards, which sometimes include roundabouts and traffic lights. The maps are too small for traffic lights to be effective, as they just create a ton of blockage, but roundabouts are useful at major junctions.

Another reward, and the game's namesake, is the motorway. This was a bit counter-intuitive for me: I assumed a motorway would be a road upgrade, perhaps making the road twice as wide, but in fact a motorway is just a shortcut between two points. The main use for a motorway would then be to create an overhead bridge across a major road, instead of the intuitive use of being a main highway.

The colours given to buildings are not random; various areas of the map are classified, for instance, as a red suburb, and only red houses appear there. Each coloured suburb has a couple associated stores, which may be close or may be on the opposite side of the map.

The strategy you create will be based on coming up with the best method of connecting two points across a map with as little crossover as possible. Intersections are a bad thing. Creating segregated road routes then sounds like a simple solution to creating an efficient road network, but you are limited by resources and map size (which grows as the game goes on) and, as the game goes on, will be forced to divert traffic into other roads.

As the game goes on traffic starts to slowly but surely build up until you reach a point where you give up as half a dozen stores reach breaking point simulateneously.

As I've played through the levels I have come across a few annoyances, however they do not distract from gameplay too much.

Overall the game is a very enjoyable simulator with pleasing visuals and satisfying music. It continues the winning formula of a simple, minimalistic simulation and is not a huge leap away from Mini Metro. The game looks easy at first glance but catches you out with its inevitable overwhelming scale.

You can take your time thinking and planning the creation of an efficient road network, or you can just jump in with a hodgepodge of roads that you clean up later; whatever works for you.

If you enjoyed Mini Metro will will enjoy Mini Motorways as much if not more due to its added features and more opportunities for strategy.

Mini Motorways releases 20 July on Steam for Windows and macOS.

A beta of the game was released for the Apple Arcade two years ago in September 2019.